As you all know, I love yarn.  I really do.  David says we have too many yarn wreaths hanging in the house now so instead of making one for the girls room, I decided to wrap some cardboard letters for their room.  WARNING: this project takes a WHILE!  It’s not difficult, just time consuming. It took me two evenings to complete.  I am also glad I didn’t decide to make their whole names! 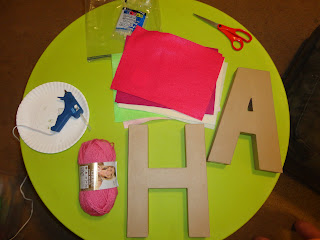 For these adorable letters, you will need:
Cardboard letters (I got them at Joann’s)
yarn, one whole bundle per letter
glue gun
scissors
felt for the flowers, if you want them 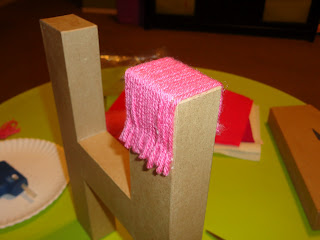 Begin by cutting some small strands and gluing then to the outer edges, I just did the tops/bottoms of them.  This helps to hide the cardboard and also prevents you from having to use so much yarn.  Then beginning wrapping. 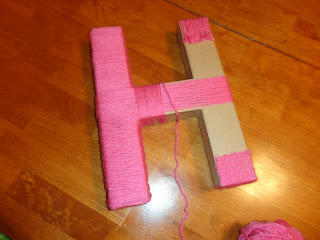 You will have to wrap in different directions to cover the whole letter. The H was easier than the A because the A has the little hole in the middle.  To wrap inside that hole I cut a super long piece of yarn that was still attached to all the yarn I had been wrapping and kept pushing the bundle through the hole.  After it was mostly covered then I hot glued the yarn to the back and then glued a new end down and continued wrapping.  These letters definitely have a front and a back, so don’t worry about how it looks on the opposite side.  Now, I originally was going to hang them but the decided to just rest them on the bookshelf. If you wanted to hang them, you could hot glue a pretty ribbon to the back and make a hanger.  Or you could place them on a shelf, which would look nice too. 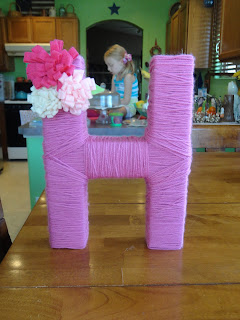 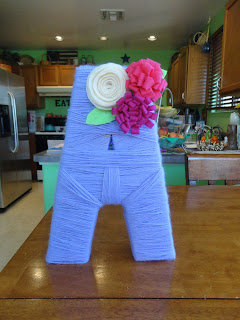 And Abby’s letter!  She helped me make the flowers and wanted on rolled flower and two felt mums.  We added some small leaves for more color. I explained how to make both of these flowers a few blog posts back so if you need a reminder, just scroll down 🙂
So, if you decide to make these, just be prepared that they take a while to do.  These are very girly and now of course Jacob wants a J, so I will probably have another tutorial in the future on what I decide to do for his.  I’m thinking Mod-podged super hero fabric…
Happy crafting!!

Here's what's been going on at Our Three Peas! - http://eepurl.com/hkkB95