I have been having trouble lately with getting Abby presents.  She’s sort of in between stages; too big for “baby stuff” but not quite ready for some “big girl” technology stuff.  There’s these new toys on the market this year that sort of fall into that “in-between” stage: The Fijit and The Furby. (and yes, I realize that Furbuys were out forever ago as well!).  These strange toys are part robot and part stuffed animal.  I had seen them and thought that Abby may like one, but they were like between $45 and $55!  Ummm, no way.  I don’t even spend that kind of money on myself! So I had put it out of my mind, until today.  This morning Target was having a daily deal with The Fijit being on sale for $15!  I think, “Well for $15, I may as well get it!”.  I quick log on, add it to my cart and begin paying.  As I am submitting, it’s suddenly becomes sold out. 🙁  Oh well, not meant to be I guess.  So I go on with my day, house stuff, run to Joann Fabrics, come home.  After lunch, the kids are “resting” and suddenly I read on one of my trusty coupon blogs that The Fijit is actually on sale IN STORE as well for $15, only for today!  I also had two get a $10 gift card when you spend $50 coupons that expire tomorrow, and I really wanted to use them.  The problem was the two peas in the next room!  They notice everything, so how am I going to get Christmas stuff with them in the wagon?!?  I decide to figure it out on my way, knowing that these types of deals usually sell out quick and also I didn’t have too much time before school was out.

“Who wants to go to Target with me?!?!?!” I say with a huge happy face.  I knew they weren’t going to want to because they already had to go to a store with me earlier. I bribe them with a mystery lego toy and bring the ipad.  In the car we go.  I think that if I could get the big wagon, the basket part is more blocked off, so I may be able to hide stuff, but if I wanted to use the coupons, since I still had Christmas stuff to buy anyways, I was going to have to hide it.  MY REUSABLE BAGS!  Bingo!  I can just put the stuff in the bags in the wagon and then they won’t see them!  So we rush into the store, me holding Hannah horizontally, my coupon binder, my reusable bags and my own bag, with Jacob trailing behind.  We have to rush to both sides to the store and FINALLY find a big wagon.  I get everyone buckled and rush to the toy section.  I find The Fijit only in green (it’ll have to do) and hide it in a bag.  I bee-bop from aisle to aisle getting the few things I wanted, hiding them all in bags.  Soon, I feel like someone is following me and I turn around to see a Target security guard watching me.  Oh great!  I think.  I get a few more things and am ready to check out, but then, there is the security guard again!  Ahhh, so annoying!  Doesn’t he get what I am doing!?!  I walk near him and I say quietly “I’m not hiding things for the fun of it…I have two kids with me, don’t you understand?!?  Don’t you get it??”  The guy, or should I say “kid”, looks at pea #2 and #3 in the wagon playing “I can be Barbie” on the ipad and finally puts two and two together.  I rush past him and to the check out lines.  After fumbling through two transactions, all while hiding a whole wagon full of toys, we check out and score some pretty good deals.  I sneak the toys in the back, cover with the blanket and make it out in under 25 minutes with no kid the wiser.  Sneakily shopping with kids isn’t easy, but I did it!  Hooray for me!  And now we are the proud owner of a Fijit. 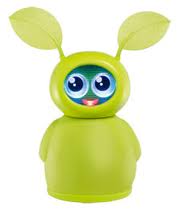 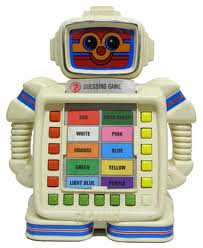 Yea, you remember this guy 🙂
So hopefully she’ll like it and at least play with it for two weeks.  Hopefully…
This site is proudly sponsored by WebHostingHub.

Here's what's been going on at Our Three Peas! - http://eepurl.com/hd0zqT