Well…my first blog post…here is it!! Having spent more than 3 hours last night just getting the blog ready to post on, I already have high expectations..haha!  But seriously, I have toyed with the idea of writing a blog for almost a year now.  It’s a good way to share with family and friends what the Thomas Clan is up to and also to share some of my words of wisdom sprinkled with a hilarious story or two.  My mom, who passed away in March from breast cancer, always said I should write one.  I even registered this page almost a year ago!!  My hesitation was that my fear that I would be writing for an audience of one, and what would be the point of that?  I am already living my life so why would I need to write it down?  I’ve had a few friends tell me to just do it and one in particular that PROMISES me she’ll read every post, soooo at least I will have an audience for two. Nevertheless, here I go.  I dedicate my blog to my mom, who encouraged me to do what I dreamed, no matter how silly 🙂
Those of you who know me know that I do not drink coffee.  I never have enjoyed the taste of it unless it was smothered in sugar, mocha or caramel.  Having had my metabolism go down the pooper as I turned 30 a while back, I try to avoid all those extra calories, especially in liquid form, unless, of course, it’s a margarita because in that case I’ll have three 🙂 So I always have had my usual cup of tea in the morning and usually a home-made chai (or even a real one, if I am lucky) during the day. But recently, I’ve decided that I need some more kick and wanted to give some homemade coffee drinks a shot.  After pinteresting some recipes and testing a few out, I decided to create a delicious one that isn’t half bad for you and isn’t loaded with sugar. Some friends have requested my recipe so I will share!  Keep in mind that I am no fancy cook, my husband is MUCH better than me.  I am by-the-recipe type of gal, but i think this turned out pretty good.

First thing you will have to do is make some “coffee ice cubes”.  I only had instant coffee so I used 1 heaping tablespoon and mixed it with two cups of water and poured it in an ice cube tray to set over night.  I have been making two or three trays at a time so that way I have some on-hand.  I also have a plethora of empty trays left over from my baby-food making days, so there is never a shortage of those.  When your cubes are frozen, take them out and place in a zippy freezer bag for easy use.

Ok, now onto the recipe:

a dash of cinnamon

– I “ice crush” the cubes a bit before to break them up some and then add everything else in the blender and blend till smooth. 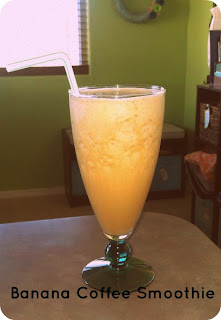 There ya go, very easy and lower on calories.  I don’t know how many, but I know it’s less than a frappuccino!! One batch actually makes twice what the picture shows, I just put in in a fancy cup to look pretty in a picture.  Normally, I fill up my venti iced starbucks cup and get my drink on.    Try it out and let me know how you like it!!

Here's what's been going on at Our Three Peas! - http://eepurl.com/g4PKy1

This message is only visible to admins.