A few days ago, I ranted on about how my kids can be a$$holes and that it was my fault.  Part one of my mission was the Toy Jail, to try and teach the peas the concept of responsibility and to eliminate the stress of me constantly having to ask, beg and plead them to pick up there toys.
**UPDATE: So far, not a single toy has been sent to Toy Jail.  They have been picking up their items promptly.  I have seen some sabotage though!  Hannah had purposely tried to leave one of her sibling’s toys out for them to go into toy jail!  What a brat!  I didn’t fall for that trick! Hopefully, they will continue to pick up their crud on their own.

For many months, I had been wanting to make the kids chore charts.  FINALLY I finished them.  I was going to do a long tutorial on them, but they didn’t quite turn out as nice as I would’ve liked, which is fine by me, but I don’t want to share a long tutorial on something that doesn’t look perfect!  I will give a quick synopsis on how I made them, though.

I wanted them to be magnetic, so I bought three thin sheets of magnetic metal (not all metal is magnetized so be sure to check!) and mod podged scrapbook paper on top,  I allowed the kids to pick what ever kind of paper they wanted.  I then bought three cheap frames and placed the metal inside of it, sans the glass. 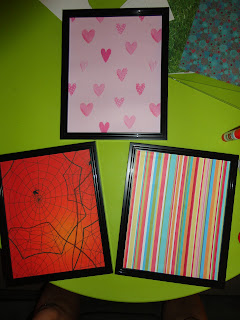 I then glued the kids names and “to-do” and “all done” on them.  Afterwards, I made the chore magnets.  I used a thick foam board and glued the chore on the front and the magnet on the back.  I also mod podged the front of the chore “buttons” so they didn’t get dirty. 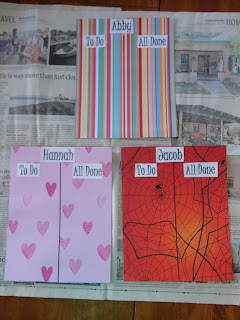 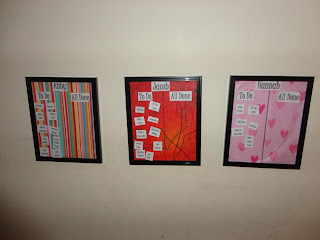 The part that didn’t quite turn out the way I wanted was that the paper kind of wrinkled some when the mod podge went on.  You can see it on Hannah’s more because of the color.  The kids don’t mind and I don’t either.  I hung them in the hall way by the kid’s rooms.
I made the chores be fairly basic, for now.  Some of them are the same for all three kids and then I have some other special chores that I rotate between the kids so they all take turns having a chance to do them.
The chores I chose for all three were:
make bed
clean room
put toys away
put clothes in dirty basket
homework & reading (just reading for Hannah)
The “special” chores are:
feed Biscuit
water inside plants
water outside plants
vacuum couch
get mail
sort laundry
dust living room
dust bedrooms
wipe down cabinets
So far, so GREAT with the chores.  The kids really like doing them and have been makng their beds without me even asking!  If they finish all their chores in a day, then they get to pick a reward for the next day, like stay up a few (and by a “few” I mean like 5) minutes later, a quarter for their piggy bank, extra tv/computer/phone time, or dessert after lunch.
The end goal is for them to move their chores all on their own, with little intervention for me.  On our busier days, I haven’t pushed them, but they are really taken to wanting to help out.  Hopefully I can keep up with it, so they will continue to be successful with them!
I want my kids to understand the meaning of “helping out” and to grow up to be well-rounded, kind people….and not selfish jerks.  This is a good step! 🙂  Don’t want your kids to grow up to be jerks??  Make them help you around the house, it builds character.
This site is proudly sponsored by WebHostingHub.

I wear a mask because I don't want to be mistaken for a Trump supporter.

BREAKING: Supreme Court rules Pres. Donald Trump cannot block a subpoena for his financial records sought by a New York prosecutor, ruling he is not immune from criminal investigation. https://abcn.ws/2AIjuWi

This message is only visible to admins.